"It all started with a boy's dream"
from “The stocking genius” by Enzo Pinelli.

An ingenious intuition by its founder, Enzo Pinelli, brought to fruition the manufacturing traditions of the stocking district of Castel Goffredo in the province of Mantua, where he formed his own know-how.

SOLIDEA has revolutionized the concept of elastic stockings, offering collections of graduated compression fashion stockings and tights that combine: 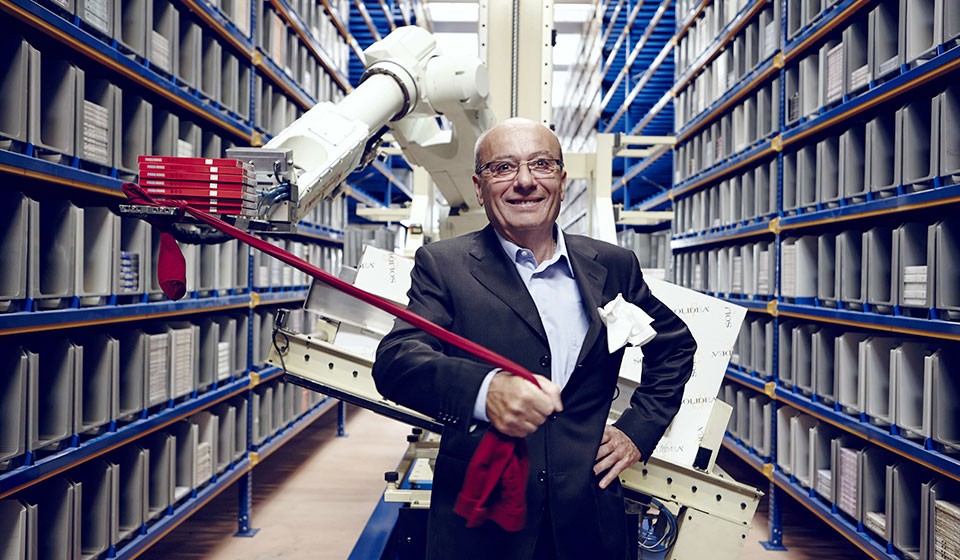 Between 1981 and 1990 it produced stockings and tights for some of the major international fashion designers and luxury brands, during the prêt-à-porter boom and the widespread diffusion of Italian fashion.

In 1997 Enzo Pinelli created the SOLIDEA brand, patenting and producing leading-edge products such as shorts with micromassage waves.

In 2001 SOLIDEA also entered the European and overseas markets with a steadily increasing presence. Today the brand can be found in 70 countries throughout the world and has 15,000 sales outlets in Europe alone.

In 2010 it began a new marketing and communication strategy bringing SOLIDEA to a new market position, reaffirming the Brand's philosophy The glamour of well-being and strengthening the health/fashion combination, the core business of the company, with its debut, in 2014 on the Milan Fashion catwalks.
At the same time SOLIDEA started a process of support and sponsorship to culture and art, carried out on many fronts:

In 2016 SOLIDEA celebrated forty years of business with an important presence in the main event being held in its area: Mantua, 2016 city of culture, and a photography exhibition in the Santa Radegonda Gallery in Piazza Duomo in Milan.

In 2017 new technological innovations for the 4.0 industry development were introduced.  Opportunity, a third robot, came to join the robots Charlie and Spirit for the automated order handling. Two AGVs also arrived to move goods and materials inside the company in total autonomy and without driver, increasing the efficiency of the company’s internal processes and reducing preparation times and lacks.
SOLIDEA’S large investments in innovation are always part of the company’s growth strategies. Proof of this is that at each transition all the jobs have been kept.

In 2018 the automated warehouse was completed by an additional automated unit: Curiosity supplies the 3 robots with the products for the order preparation.

In 2019 the company strengthened its production departments by designing an expansion of the automated handling system for the packaging department and by inserting a third AGV to move the goods in the Semi-finished Product Warehouse and the departments nearby.

During the summer of this year the SOLIDEA GREEN ATTITUDE project started, with initiatives putting into practice the company’s engagement for the environmental protection.

Company’s pride of this project is the Solidea Forest in Kenya, which started with 1000 trees and an engagement increasing over time to protect biodiversity and reduce CO2. In particular, its fruit trees are tended by small cooperatives of local farmers and help to provide food, training, jobs and earnings in the territory. In January 2020 other 200 trees were planted for a total of 1,200 units.

Do you know that our products are OEKO-TEX certified?

Solidea graduated compression products use fabrics made with revolutionary techniques

Solidea products are tax deductible pursuant to the law

The shopping cart is empty

Free shipping in Europe for orders over 59€